Day 29. Tuesday, September 23, 2014.
Feast of St. Pius of Pietrelcina
SANTIAGO DE COMPOSTELA.
We were so excited last night that it was hard to sleep. We were up and ready to go about a hour earlier than we had planned, so it was dark for the first hour of the last leg of our Camino. We stopped for breakfast and captured the moment with a photo. 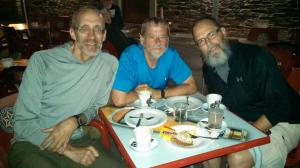 We looked forward to the Monte de Gozo (Mount of Joy), where pilgrims saw their first glimpse of the cathedral of Santiago. We were disappointed that there is no longer a view due to urban sprawl. There is only a monument whose artistic merit escaped us. We prayed morning prayer on the mount.

We continued on the remaining 4.5K down the mountain, through the city, to the cathedral square. We met a number of pilgrims on the way. It was about 11:15am when we arrived. We stopped to take pictures and orient ourselves to the area.
There is a pilgrims’ Mass every day at 12:00 noon. We had said it was not important to attend the Mass when we arrived, but when it became a possibility we moved heaven earth to do it, finding our hostal to deposit our bags and rushing back to the cathedral for Mass.

The cathedral is undergoing renovation so it took us a few minutes to figure out which door to use. The pews were packed so we had to stand in the transept with a partial view of the sanctuary. The gospel was about Jesus saying “Whoever hears my word and acts on it is mother and brother and sister to me.” It was powerful to hear this proclaimed in the midst of the cathedral packed with pilgrims. We were treated to a blessing by the butofumerio, the monstrous thurible attached to the ceiling of the cathedral which almost touches the ceiling in its arc when it is hoisted in the air and swung by eight men through the transepts of the church. You could see the fiery coals as the smoke billowed throughout the church. We plan to concelebrate the Mass tomorrow. 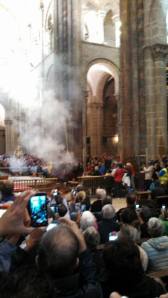 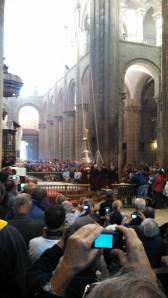 Ironically, in our excitement and exhaustion we forgot all about hugging the statue of the saint (Santiago). We plan to rectify this as soon as possible.

After Mass we rushed to the pilgrims’ office to show our credentials and receive our Compostela. We received it after a two hours wait in line. 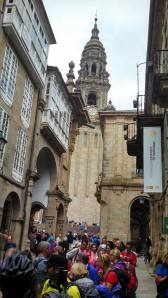 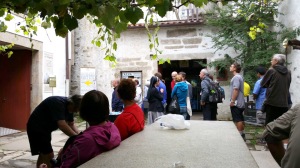 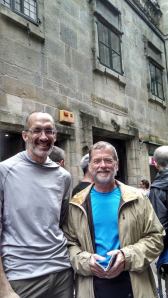 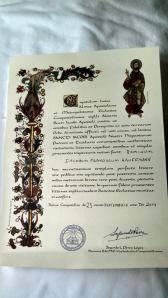 We were exhausted and tired and rushed to eat and then to take a nap. We are getting a second wind as we write this closing line.